Sometimes, things don't go according to plan. In this case, I think that probably ended up being a good thing. We'd planned to go out to Skull Valley and do some 360 degree pistol shooting (using a canyon that provides an all around backstop) and take advantage of the longer ranges to do some rifle stuff that we can't do at our usual shooting range. The pistol scenarios ended up going by the wayside, as did two of the rifle exercises we had planned, in favor of a lot of basic rifle stuff. However, I think the stuff we did do will pay big dividends in the carbine events we're doing at our regular monthly shoots. Robert's going to be teaching carbine stuff again at our July event and I think what we did out in the desert got us well prepared for that.


We all met up out at a truck stop west of Salt Lake for some breakfast. There were only five of us for this event, all regulars at our monthly events. I think the small group of people helped make the day a lot more productive, as did the fact that we all knew and trusted each other in terms of safety, gunhandling and the like. After breakfast we headed out to Skull Valley. It was pretty hot and dry out there in the desert. We all slathered on the sunblock and I'm glad we had some shade available so that we could get out of the sun. We also went through a lot of water and soda to keep ourselves hydrated. 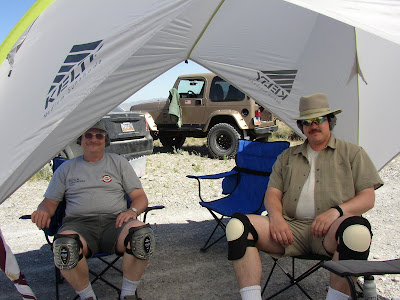 Gear
We had a wide variety of different rifles on display. I spent the whole day shooting with my Robinson Armament XCR. I also brought my .223 Norinco AK, but it never made it out of the case. The AR system was well represented with two regular rifles and one HK 416. Robin Hood switched back and forth between his Mini-14 and the AK that he just finished putting together from a flat and a parts kit. He also put a few rounds through a pump action .30-06. One interesting difference I noticed when the rifles were lying side by side on the table was the details of the AR style magwells. The regular AR had a little flare at the mag well, my XCR had somewhat more, and the HK practically had a huge funnel to help guide mags in. While it didn't make a difference today, there were a fair variety of different muzzle brakes/flash hiders on display: two birdcages, a Vortex, a ban-era bare barrel, and a slant brake on the AK. We're planning on having a carbine stage during our night shoot next month and I'm looking forward to seeing how much of a difference the various flash hiders make. 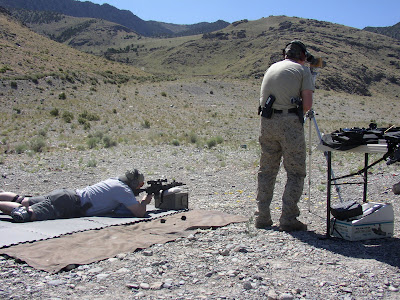 This was hardly a high-volume stress test (we spent more time talking than shooting), but all the guns ran just fine except the 06. Robin only shot about ten rounds through it and about half of them had extraction problems (one of which required banging the butt on the ground while pulling down on the fore end). The primers in the spent casings were completely flat, so this rifle seems to have a tight bore, leading to very high pressures.

Robert and I ran EOTechs on our rifles. The reticule was still plenty bright, even in the very bright sunlight with a light colored background, though I was on the two brightest settings all day. The 416 had an ACOG, while the other AR and the Mini were fitted with low power variable scopes. The AK and the 06 were iron sights only.

I carried my spare mags in my Hawkepack Rifle Bug Out Bag. I've used it as a range bag before but this is the first time I've really used it as a fighting bag. It generally seemed to work pretty well. It was a bit hard to find the magazine when reloading while prone, but some practice ought to fix that. The only real problem I ran into was when flopping down prone (rather than descending to prone more slowly and carefully) the bag had a tendency to end up underneath me. People have suggested attaching the bag to the belt with a carabiner or short length of bungee cord to help keep it in place, and I think I'm going to try that. I also found that the pad on the shoulder strap tended to end up right where I wanted the stock of my rifle to go, making it difficult to keep the stock in the right place. The pad got shoved to the back for the rest of the day and it came off the strap entirely as soon as I got home. Robin Hood had a shoulder bag for his AK mags. Other folks used a belt carrier, a three mag thigh rig, or just stuck their mag in a pocket. 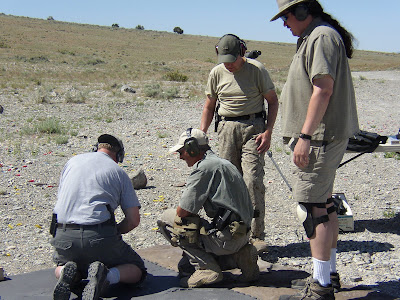 I used my MagPul PMAGs all day and I'm really happy with them. I just ordered a big batch to build up my supply. The 416 ran the steel HK mags, while the rest of the AR shooters used aluminum GI mags of one description or another. Robin shot his AK using some nifty transparent plastic mags.

Shooting
We started out by sighting in at 25 and 100 yards. I found the hundred yard sight-in kind of difficult with my EOTech. Even with the EOTech's relatively fine center dot compared to some other sights, it still complete obscured the square in the middle of the target we were using. The guys with magnifying optics were getting much better groups. I need to get out and do some more longer ranged shooting.

Once everyone was sighted in, we moved all the targets to 50 yards and started going through the basics. We spent quite a bit of time talking about slinging and unslinging rifles. Partly this was preparation for next month's event. There were a couple of instances of careless gunhandling last month, so we're going to emphasize keeping rifles cased or slung, and for some folks this is clearly going to require some education on proper techniques for slinging and unslinging without muzzling everybody with their rifle.


When you get down to the nitty gritty of safely slinging and unslinging a rifle how the rifle sling is set up really makes a difference. Slinging a rifle with a two point sling mounted to the side is somewhat different than slinging one with the sling mounted to the bottom. Three of us had Vickers' slings on our rifles, two on the side and one on the bottom. The other AR had a simple carry strap and the Mini sported a leather shooting sling. The newly built AK was still slingless.

After that we moved on to some simple shooting drills from various ready positions (low ready, high ready, indoor low ready, and field ready). Honestly, I'm not really seeing the usefulness of field ready (butt on the hip and muzzle up at eye level). High ready is very fast, low ready slower but easier to maintain and indoor low ready good for operating in confined spaces. A good two point sling like the Vickers makes it easy to maintain indoor low ready for a long time since you can just let the gun hang there with your hands on the grips. The EOTech is pretty forgiving about an inconsistent cheek weld, but I still ought to do some dry practice to mount the gun more consistently for iron sights. Also I found that 50 yards is getting a little long for offhand shooting for me (another place where more practice is required), but I could still shoot minute of man at that distance. Even for a relative novice, rifles are a lot easier to shoot and more forgiving than a pistol. 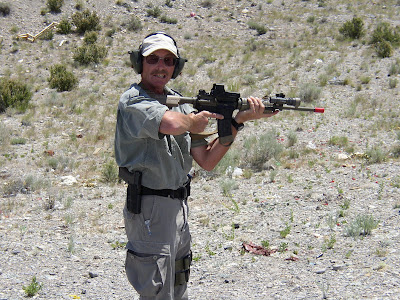 After breaking for lunch (Harold Green cooked up some nice steaks) we moved from offhand to more stable sitting positions (squat, kneeling, sitting, prone). One thing that we found was that not everybody could shoot all of the positions. Squating, in particular, was difficult for some people. Kneeling, sitting and prone were considerably more forgiving. All of these positions make hitting targets at range a lot easier. Prone at 50 yards even headshots are fairly easy (particularly since a rifle zeroed at 200 is about dead on at this distance). If you can get lower and more stable, get lower and more stable!

For these drills, we also switched from everyone shooting at once to one person stepping forward and shooting at a time. The initial impetus for this was to keep those of us down at the right end of the line from getting pelted with brass, but it also provides more opportunity for non-shooters to observe and critique the shooter's technique. 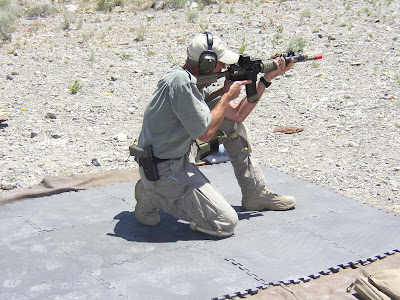 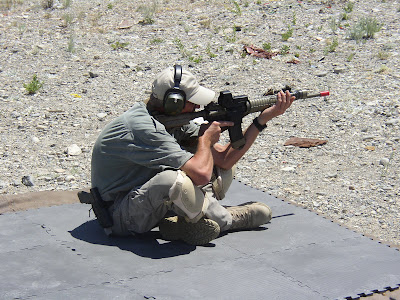 One of the things we noticed watching each other shoot was that there was a tendency for some of us to use the shooting hand to lower ourselves into or boost ourselves out of the sitting and prone positions. We tried out a little impromptu drill to combat this tenancy: You start out prone and fires two shots at the target. You then start getting up. As you get up, the RO calls out 'fire' and you have to shoot from whatever position you can settle into quickly (double knee, kneeling, offhand). It really makes you think about maintaining a fighting position at all times, rather than just moving from one position to another.

Overall, what we covered out in the desert was more limited and basic than we had planned, but I think it's going to pay dividends down the line when we're trying to do carbine stuff at future monthly shoots. Not only do we have a pretty good idea of what we're doing next month, those of us who were out there in the desert know enough to really help Robert out when it comes to teaching folks carbine stuff. Now all we have to do is stay one month ahead of everybody else and we'll be set.
Posted by Blackeagle at 7:49 PM